By Me Pascal Lepage, partner

On November 24, 2019, all the business firms in the Province of Quebec will have to comply with the posters and signs rules adopted three years earlier in response to the Best Buy case1. The Province of Quebec Court of Appeal then clearly restated the firms’ right to display in Quebec its or their trade marks in a language other than French.

The government reacted to that decision with the promulgation of Order in Council 887-2016 adopting the Regulation modifying the Regulation respecting the language of commerce and business2 that came into effect on November 24, 2016. The new rules therein contained are hence applicable since the latter date to all new commercial signs and posters and to the replacement of existing signs or posters.

It is however with regards to the existing signs and posters that under the provisions of Section 2 of that Regulation a three-year complying grace period was granted to the firms.

Those rules may potentially require some significant modifications to the fashion in which the firms display their trade marks both inside and outside their places of business.

To support the firms in their transition, the Office québécois de la langue française (the “OQLF”) has published an example illustrated guide allowing a global understanding of the new regulatory provisions. Such a publication is vested with an obvious utilitarian purpose, but it does not substitute in any ways the statutory instrument which is much more detailed. This guide is available on the OQLF’s Web site3.

Curious about knowing if your signs and posters comply with those new Regulations? We invite you to read further the following pages, and to fill in the annexed graphic chart which, we hope, will assist you in answering to that interrogation.

Let us examine the main concepts at issue.

Let us remind you that the Charter of the French Language4 (the “Charter”) enacts that public signs and posters used in Quebec must be in French. Sub-section 25(4) of the Regulation respecting the language of commerce and business5 hence stipulates that a recognized trade mark within the meaning of the Trade Marks Act6 may appear on public signs and posters exclusively in a language other than French, unless a French version has been filed (in other words, registered). In such a case, the use of the French version in Quebec must be privileged to the version in the other language. Let us point out that the governmental authority governing in Canada the registration of the trade marks is the Canadian Intellectual Property Office (CIPO)7.

The purpose of those provisions is evidently to ensure the presence (or the precedence, should we rather say) of French in the linguistic landscape of Quebec by establishing the markedly predominant rule prescribed by the Charter.

On a same sign or poster, the French text is deemed to have satisfied the visual impact threshold required under the Regulation if the following conditions are met:

(iii) the other characteristics of the sign or poster do not have the effect of reducing the visual impact of the text in French.

One must however be cautious of the fact that those characteristics do apply to the texts used in connection with a trade mark, and not to the trade mark per se. For example, the following display would not comply to the aforesaid rule since the space allotted to the word “CAFÉ” is not at least twice as large as the space occupied by the word “COFFEE”, and that the characters used for those words are of the same dimension: 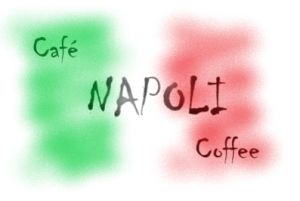 The other characteristics of that display do not however have the effect of reducing the visual impact of the text in French. On the contrary, those other characteristics rather seem to boost its visual impact because the word “CAFÉ” is located on top of the other words and appears first in the display (that might only be for reasons of compliance to some linguistic syntax rules applicable both in French and English).

Obviously, as in the example below, when the text used in connection with the trade mark is exclusively shown in French in the display, it then complies with the Regulation. 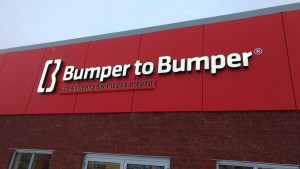 Where the texts both in French and in another language appear on separate signs or posters of a different size, the text in French is deemed to have satisfied the visual impact threshold required under the Regulation if the following conditions are met:

(iv) the other characteristics of those signs and posters do not have the effect of reducing the visual impact of the text in French.

The abovementioned display rules apply to all outside signs and posters, and to those that can be seen from the outside, namely:

(i) signs or posters affixed on an outside wall of an immovable (attached to the immovable or affixed to it);

(ii) signs or posters affixed outside premises located inside an immovable (ex. premises situated in a mall or a shopping center);

(iii) signs or posters situated inside an immovable or premises that can be seen from the outside; and

(iv) signs or posters situated outside an immovable on a bollard or other independent structure of that immovable;

but they don’t apply to the following displays:

(v) “totem” type structures on which more than two trade marks appear; and

(vi) other bollards or independent structures (that are not affixed or attached to an immovable) displaying a trade mark when that same trade mark is also displayed on the outside of the immovable, (and to which the display rule will apply).

As an illustration of the foregoing, the display of the trade mark SECOND CUP® appearing hereunder on a “totem” type structure complies with the Regulation because that same trade mark is also displayed on the front wall of the immovable where the generic terms “LES CAFÉS” have been added. In this instance, the generic terms are exclusively written in French, and that’s the reason why the display is congruent. One would obviously draw a different conclusion if the generic term “COFFEE” had also been displayed in characters of the same dimension. 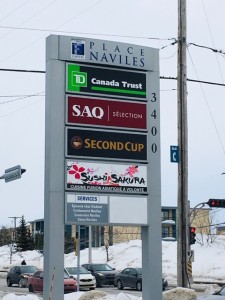 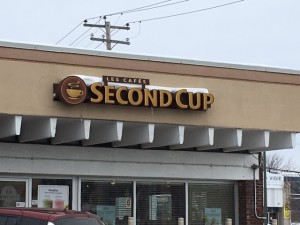 III) The sufficient presence of French

The display of signs and posters of a trade mark in another language than French is thus allowed if the presence of the French language on the premises is sufficient. This purpose may be achieved in different ways. So, as we have seen it in the above example, the addition of a generic term (ex. Aliments), of descriptive generic terms (ex. Aliments biologiques), or of a slogan (ex. Votre destination santé bio) or of any other information statement intended to any customers (ex. “Fier de vous offrir des aliments sains et bio depuis 2010”) will ensure a sufficient presence of French on the premises.

To insure a sufficient presence of French, one must still achieve at the same time the legibility and visibility of the complementary signs and posters:

In the present instance, the rule is that the legibility of the trade mark and of the complementary signs and posters must be insured in the same visual field. For example, it would not hence be possible to display a trade mark in another language than French on the front wall of an immoveable and a slogan exclusively in French on a side wall of that same immoveable.

At first glance, one may suggest that legibility is somewhat of a subjective criterion. We don’t really have all the same visual acuity; what is legible for someone will not necessarily be the same for somebody else! In order to assess the legibility adequacy, on an objective basis, the legislator has thus positioned the observer in relation with the place where the signs or posters are located. In brief: 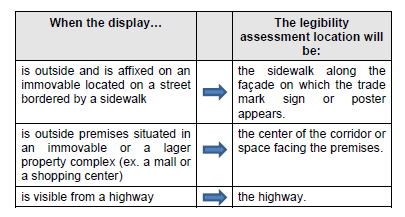 The visibility of the complementary signs and posters must be permanent and appear in a similar fashion to that of the trade mark displayed in another language than French. That is to say that a mere removable banner showing no permanency character will not meet the test if, on the other hand, the trade mark itself is displayed on a lighted sign affixed on the front wall (façade) of an immovable.

The complimentary signs or posters must also enjoy an identical lighting as the one used for the trade mark.

One must admit that those rules are quite simple! Without any intent to undermine your optimism, one must however keep in mind that, in case of violation, they also come with some penalties provided under the Charter. Hence, an infringer firm is likely to be imposed monetary penalties of at least 1 500$ but no more than 20 000$ for a first violation. Those monetary penalties are doubled for a repeated offence.

Let’s hope that when it comes to enforcement, the authorities will show some flexibility in the implementation of a collaborative approach to support the firms and promote their compliance to the Regulation, instead of a strict coercive enforcement approach. Especially since compliance to those rules might call for major alterations to the existing signs and posters and generate substantial expenses which are most certainly not envisioned in the budget of the firms doing business in Quebec.

Don’t waste any time then; go take in a hurry the measurement of your signs and posters’ character dimensions, affix them to your walls and façades in a suitable manner, change your defective bulbs lights and fluorescents and calibrate adequately your lighting systems! Let’s hope you’ll be ready by November 24, 2019. 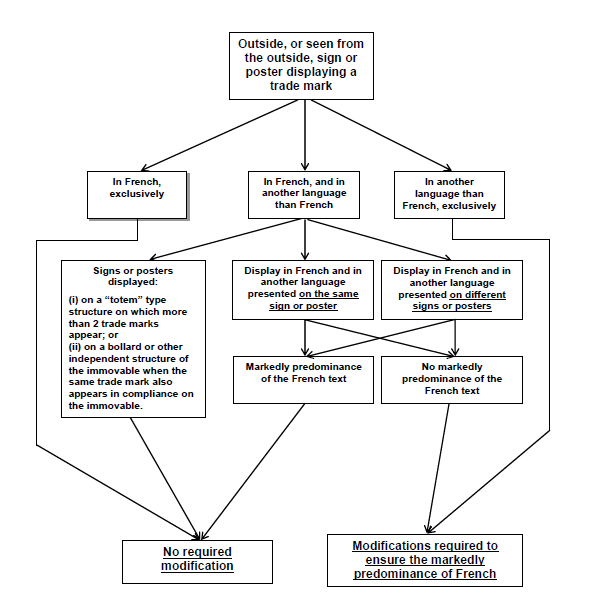